The Things You Find While Making a Finding Aid

Our steadfast and industrious volunteer David Swain is currently working on a finding aid on the British Colonial Papers for Georgia.  Previously, David toiled for three years at the David Library creating a finding aid for the British Colonial Papers for East and West Florida. David notes that in the run up to the Revolution, Georgia is an interesting place, located between more “patriot” South Carolina and more “loyalist” East and West Florida.  Recently, he came across a rather extraordinary letter written by Georgia Governor James Wright in Savannah to the Secretary of State for the Colonies, the Earl of Dartmouth, in London.  David wrote the following introduction to Wright's letter to put it in historical context.  His transcription of the letter follows in italics.

By August 1774, Royal Colonial Governor James Wright of Georgia had become a frustrated man.  As governor since 1760, Wright combined the practical skills of a political and administrative leader with the ideals of a strongly patriotic British gentleman.  For most of 14 years, Wright’s two most important preoccupations had been economic development, especially through a nascent silk industry, and maintaining peaceful relations with the Indians on whose lands Georgia was founded and was expanding.

In the early years, loyalty to British sovereignty was a given not to be questioned.  Wright never questioned it, but, beginning with the controversy in 1765-66 over Britain’s Stamp Act, inhabitants of the American colonies began, in varying degrees, to question America’s proper relationship with the British Empire.

By 1774, questioning led to debates, which led to protests and resolutions asserting American rights, which led to royal governmental attempts to quash “illegal” activities, which further fanned the flames of insipient rebellion.

Georgia played something of a transition role geographically.  In Charleston, South Carolina to the north, the Sons of Liberty were active and influential.  In St. Augustine, East Florida to the south, virtually no rebellious movement developed.  In Savannah, Georgia, more of a protest movement developed than Governor Wright wished for, but it remained relatively weak—partly at least because of the Governor’s considerable political and administrative skills and his rock-solid British loyalism.

Still, in August 1774, Wright had grown both frustrated and pessimistic.  In an extraordinary letter dated August 24, Wright allowed himself to express his personal uncertainties and fears to his “boss,” Secretary of State for the Colonies, the Earl of Dartmouth.  This was an official, numbered letter, yet it strayed from the usual content of reports, justification of actions taken, and requests for assistance into a morass of personal doubt and uncertain speculation.  The convoluted nature of Wright’s sentence structure suggests the unrest within his mind.  Yet, through this fog, Wright’s pessimistic speculations were remarkably on target for what was to come starting the following April in faraway Massachusetts Bay—an American revolution, which eventually swallowed up Wright’s royal colony of Georgia.


In mine of July the 25th No. 23 & August the 13 No. 24 I acquainted your Lordship that I should give you a full account of the Conduct & Proceedings of the Liberty People here, as soon as I knew for certain what they did or meant to do, and I mentioned that Some Papers were preparing by which I believed it would appear that these Resolutions were not the voice of the People, but unfairly & insolently made by a Junto of a very few only but which Papers are not yet Completed.
everything my Lord was done that would be thought of, to Frustrate their attempt, but this did not totally Prevent it.  They have been strongly invited by the Carolina Sons of Liberty, who have been Suffered to do whatever they Pleased without the least mark of disapprobation or attempt to Check them, that I have heard of.  and now again my Lord as in the time of the Stamp act, I am to be Reflected upon & abused for opposing the licentiousness of the People and its thrown out “Why should our Governor do so & so when the People in Carolina have gone Greater Lengths than we have, and the Governor has not taken any notice of it”  In short my Lord at such times as these if a man has Resolution & integrity Enough to stand forth & attempt to do his duty its Like being set up as a mark to be shot at, and Raising the Resentment of great numbers against him  However altho’ this is very disagreeable I shall not Regard it.


I have been Informed of another Summons & meeting to be in St. John Parish on the 30th inst, and my Lord as long as these kind of Summonses and meetings are Suffered a Private Man to take upon him to Summons a Whole Province to Consult upon & redress Public grievances, or support Grievances, I apprehend there will be nothing but Cabals & Combinations and the Peace of the Province & minds of the People continually Heated disturbed & distracted and the Proclamation Issued against them is termed arbitrary & oppressive & an attempt to debar them of their natural and Law


full Rights & priviledges.  In short my Lord if these Calls & meetings are considered as illegal & improper it will require the interposition of higher Authority to remedy the Evil.  for the executive Powers of Government in the Colonies are too weak to rectify such abuses, and Prosecutions would only be Laughed at and no Grand Jury woud [would] fine [find] a Bill of Indictment and the Persons ordering & carrying them on probably Insulted and abused.


And now I am mentioning these matters Permit me my Lord to say how things appear to me.  and I conceive that the Licentious Spirit in America has received Such Countenance & Encouragement from many Persons, Speeches, and declarations, at the time of the Stamp act, and ever since in Great Britain, and has now gone to so great a length and is at such a height, that neither Coercive or Lenient measures will settle matters and Restore any tolerable Degree of Cordiality & Harmony with the mother Country.  And in short things & circumstances in America have increased so fast, and at this time so amazingly exceed what at the first Settling and Planting the Colonies could Possibly have been Supposed or expected and America is now become, or Indisputably ere long will be, such a vast, Powerfull & opulent Country or Dominion, that I Humbly Conceive in order to Restore & Establish Real & Substantial Harmony affection & Confidence & that Great Britain may receive that benefit & advantage which She has a Right to expect from the Colonies it may be found advisable to Settle the Line with respect to Taxation &c by some new mode or Constitution, and without which my real and candid opinion is, that however matters may be got over at present & whatever appearance there may be of amity & union the Flame will only be smothered for a time & break out again at some future day with more Violence.


But be these things as they may I doubt not that your Lordship will Judge it is absolutely necessary that they are brought to a Point & Clearly Settled and Established Some how or other, and not Suffered to Remain as they are, nothing but Jealousies, Rancour, and ill Blood.  Law & no Law, Government & no Government, Dependence and Independence, if I may be allowed the expressions and every thing unhinged and Running into Confusion, so that in short a Man hardly knows what to do, or how to act and its a most disagreeable State to one who Wishes to Support Law Government & Good order & to discharge his duty with Honor and integrity.


I beg Pardon my Lord for Presuming to Touch on the Grand & very delicate Point, but Trust that my Zeal for His Majesty’s Service & to discharge my duty in every Respect with the Utmost integrity will Plead my excuse, But my Lord if any alteration should be thought of yet Previous to any thing of this kind intire Submission & obedience to the Sovereignty of Great Britain, and Satisfaction for all Private damages & Injuries ought to be exacted & fully Complied with in & by all the Colonies.


I have the Honor to be with Perfect


Esteem my Lord your Lordships most Obliged 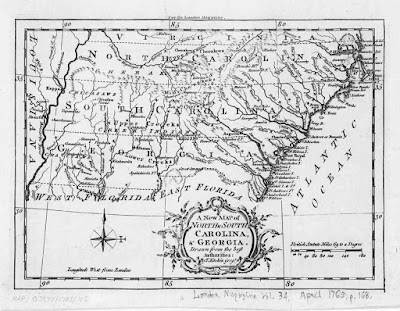 Posted by David Library of the American Revolution 0 comments