Erin Weinman of Somerville, NJ is a senior history major at Rutgers  University.  She is interning at the David Library this summer.﻿﻿﻿﻿

﻿
The Fourth of July is just around the corner, and the nation is preparing once again to celebrate our founding history. The David Library is home to an extensive collection on the Declaration of Independence, some of the signers and the events that surrounded America's declaration of independence from England. Why not pick up a little summer reading to get you in the spirit (of '76)?  The following books are available at the David Library (call numbers are the David Library's), but you are likely to find some of these at your local public library or bookseller as well. 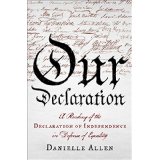