Guest blogger Ken Miller tells us about his research on three Massachusetts women during the American Revolution.

The American Revolution carried grave consequences for Bathsheba Spooner, a suspected loyalist in Worcester County, Massachusetts. The daughter of the reviled Tory, Brigadier General Timothy Ruggles, the thirty-two-year-old Spooner orchestrated the murder of her well-to-do husband, Joshua, in early March 1778 with the help of three co-conspirators—her young lover, the teenaged Continental soldier, Ezra Ross, and William Brooks and James Buchanan, two British prisoners of war captured during the Battle of Saratoga. After beating their victim to death and disposing of his corpse in the family well, his assailants hastily divided their spoils. Apprehended, tried, and convicted for the grisly crime soon thereafter, all four malefactors perished at the gallows on July 2, 1778. Tragically, revolutionary authorities chose to disregard legal precedent and hang Spooner even though she had reached an advanced stage of pregnancy, with her post-mortem exam revealing a five-month old fetus.


I spent the month of February at the David Library researching the Spooner case as a short-term residential fellow. I’m approaching the controversy as the centerpiece of an anticipated microhistory designed to illuminate the perils of loyalism across Massachusetts during the initial years of the Revolutionary War. To contextualize the murder, I conducted extensive research in Britain’s loyalist claims and colonial office records, the British headquarters papers, and the correspondence of the Massachusetts general, William Heath. I also perused the papers of Robert Treat Paine, the case’s prosecuting attorney, uncovering long neglected trial testimony.


My investigations ultimately shed light on the wartime travails of Spooner’s more obscure Worcester County neighbors, underscoring the painful costs of allegiance for Whig and Tory alike. Among the loyalist claims, for example, I located the petition of the widow Ann Greenleaf, a Bolton resident who courageously defied local Whigs by carrying intelligence to the enemy until she was finally discovered and forced to take refuge behind British lines in late 1778. Sarah Duncan, by contrast, the wife of a loyalist merchant, refused to abandon her home and family, prompting her devoted husband to remain in Worcester and brave the wrath of vengeful patriots. The stories of these diverse Massachusetts women illustrate the wide range of female experiences during Americans’ first civil war. 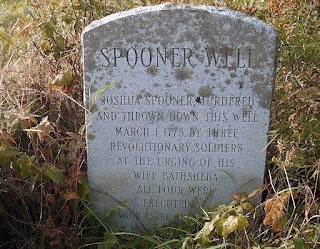 As for Bathsheba, the site of her husband’s slaying, the infamous Spooner well, remains an historic landmark, located just off East Main Street in Brookfield, Massachusetts. Alas, two hundred and forty years after the crime that sent her to the gallows, Bathsheba’s final resting place remains unknown.

Ken Miller is associate professor of early American history at Washington College in Chestertown, Maryland, and the author of "Dangerous Guests: Enemy Captives and Revolutionary Communities during the War for Independence," just released in paperback by Cornell University Press.

Posted by David Library of the American Revolution 1 comments