The Penobscot Expedition by Geoffrey Fisher

Geoffrey Fisher, who completed a practicum at the David Library this past spring for credit toward his M. A. in public history from American Public University System, has prepared this article on the Penobscot Expedition, which occurred 238 years ago this month. You can come to the Library and hear Geoff make a presentation on the Battle of Brandywine on Saturday, September 9 at 3:00. 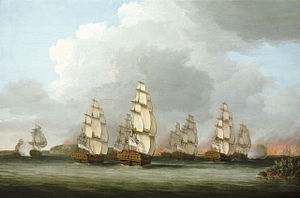 The Penobscot Expedition, July 19-August 15, 1779, was the largest naval event during the Revolutionary War.  Other than to eliminate the threat on the , the Americans did not have a clear strategic impetus for this naval engagement that resulted in a debacle for the rebel forces. The British, on the other hand, held a clear strategic vision for the river's and island's defenses, and the fortification that housed the enemy soldiers. First, the construction of a fort would protect British interests to harvest the wood from the surrounding area. Also, a fort would project enough naval power to protect British ships while inhibiting any designs from the Americans on seizing this strategic resource for their fledgling navy. Second, the construction of a fort would ensure sanctuary of the Loyalist population with the British on , which was not far off. Third, the fort could serve as a base of operations for British naval campaigns off .[1]


For the Penobscot Expedition, the Massachusetts State Board of War delegated Brigadier General Solomon Lovell to command 1,500 militiamen. General Lovell shared leadership with Commodore Dudley Saltonstall. Saltonstall who led 40+ naval vessels during the expedition. All told that amounted to about 344 guns. Commodore Saltonstall also oversaw 300 marines.[2]


Saltonstall's orders were two-fold. First, he was to take capture or eliminate all of the enemy's sea and land forces. Second, he needed to seek a cooperative working relationship with the ground commanders on the ground so that both, the militia and the navy, could neutralize the enemy's forces.[3]


Arriving on the 25th of July, the American fleet entered Magebagiduce harbor and saw three British ships for a total of 56 guns. As they went up the waterway, the Americans came face to face with the British northern defenses, that included "a large fort on a regular eminence, below which were two batteries, on the south side another battery was forming; the whole made a pretty formidable appearance." As the Americans approached, they noticed 's daunting exterior. So they lobbed a few shells, which in turn led to a return of fire from the fortified British and spirited cannonade between the two sides ensued.  This barrage of cannon fire would not lead to any ground invasions.[4]

The American assault on is broken down into three or four main attacks. The first attack began on the 25th with General Lovell launching his militia forces against and the island that it was on, Magabagiduce. The cannon fire that broke out between the fort's defenders and the ships holding the landing parties did not produce the positive results that General Lovell was hoping for when he started his offensive. Eventually, he called off his attack due to contrary winds that prevented his entire force from landing. Lovell did not see any reason to land the militia against a well prepared defensive position piecemeal.[1]

Even though Lovell called off his attack against the fort and the island, the American navy, under Commodore Saltonstall, went ahead with their attack in the early hours of 26th by successfully landing on another island. This attack saw close inter-service cooperation during this stage of the first assault since "about 150 marines, led by Captain John Welsh of the and covered by the guns of the flotilla, landed on Nautilus island directly opposite the British fort and commanding the mouth of the harbor. The Americans drove off its defenders and captured four pieces of artillery and some ammunition. Despite inclement weather, they also managed to get some heavier guns ashore." A possible reason for the successful landing and the close cooperation between the services is that this night time assault did not experience any contrary winds rather than the attempted invasion commanded by General Lovell. Subsequent attacks would not be so promising.[2]


The second attack began before the sun had risen on the morning of July 28. Commodore Saltonstall and Brigadier General Lovell launched another attack that commenced with another showing of inter-service cooperation. The American brig Tyrannicide with its fourteen guns was to remove the British from the woods by firing into them so that the landing point was devoid of the enemy. The Americans landed with three units: the marines on the right, two divisions of militia on the left and center, respectively. As the Americans put their landing parties ashore, they received assistance from "a heavy cannonade of round and grape shot." The Americans sustained a loss of "a great number of men," while the British losses were "inconsiderable." Despite sustaining heavy casualties during the landing, the American landing parties continued to hold the initiative.[3]


Although there is no way to fully ascertain from the primary sources how or why the American's second attack fizzled out, the secondary sources do mention the close inter-service relationship that was seen in the early hours of 26th and the opening stages of the second attack began to fall apart at the most critical part of the battle, the taking of Fort George. An American primary source reads that after Tyrannicide cleared the landing point, the rebels were able to land six or seven hundred men that

killed sixteen men, and wounded as many; our men with great resolution returned the fire, ascended the almost impassable precipice, routed them and took possession of the hill, killing (as they supposed) about as many as they lost, and taking a few prisoners; from thence they advanced to a battery near the large fort, and possessed themselves of it, with considerable artillery and baggage.

The above American primary source reads very differently from the British account exacting a heavy toll on American invaders while downplaying their losses.[1]
On July 31st the Americans began to plan their third attack onto the island to take the fort. The plan for this attack was to get all of the marines ashore by midnight and to work with the troops on land so that an attack on a breastwork south of Fort George, which was close to British shipping, would sever the lines of communication amongst the fort and ships. On August 1st, the Americans launched their assault around two in the morning that opened up with a lot of energy and determination to meet their objective. However, the defenders found their resolve by sending out fifty men "who soon drove the enemy back, tho' allowed to be in number above three hundred."[2]

From August 2nd-15th, it is up to debate on whether or not the fourth attempt to take was an actual attack in the literal sense. In between these two weeks, Commodore Saltonstall convened war councils on August 6th, 9th, and 10th. For the August 6th attack, the proposed operation was dropped, however, because Lovell's men were an unruly lot of men who could not be counted on meeting their objective. The August 9th attack was canceled due to the risky proposition of exposing American ships to 's canon without being able to return fire. As for the third and final proposed attack on August 10th, General Lovell advocated for an attack on the British fort, the harbor, and to bait the enemy in the smaller batteries to leave their defensive positions and to come and fight the Americans out in the open. The Americans attempted to do that on August 11th, but the majority of the rebels beat a hasty retreat to their fortifications before their operation was underway. On the night of August 11th, General Lovell called for a war council on the Americans next moves. He believed that his forces did not have the necessary martial strength to counter the British on the grounds of their previous amateurish performances and cowardice, which made it easier for him to promote the lifting of the siege that started on 12th.[3]
In the evening of August 13th, the Americans decided to lift the siege and load the militiamen and marines back onto the boats. While the Americans left their cannon, accoutrements, and clambered onto their ships, the British fortified and completed another defensive position "where they are secure[d] against us; which at our arrival was only a breastwork, containing five or six-pounders, which then, in all probability, we could have reduced very easily, as also their shipping, as they have since acknowledged." The American leadership, Commodore Saltonstall, and General Lovell could not get on the same page on what should be done from one day to the next.[4]
On August 14th, British reinforcements entered the Penobscot bay with a half dozen vessels. Though the Americans still held superior numbers in ships and men, their hampered leadership and lackluster performance over nearly four weeks made their strategic and tactical initiative in untenable. This terrible turn of events threw the navy and army into hysteria considering that it could effect their escape out of the bay. On August 15th, some 200 militiamen, "sailors, and marines" began their escape back to friendly territory.[5]
From the beginning of the expedition July 25th-August 15, the Americans lost about 500 killed or captured. One could certainly say and make an argument that the expedition was a failure due to a deficiency in military training and untested militiamen, marines, and sailors. With that said, attributing the American defeat to lackluster training and unproven militiamen lets the leadership, Commodore Dudley Saltonstall, and General Solomon Lovell, off the hook. Upon closer inspection of the primary sources, it is not so much the rank and file's sub standard presentation during the attacks on the island and as it was their leaders' incompetence and lack of inter-service cooperation between the militiamen and the navy that doomed the operation. The Americans fought well in the taking of on July 26th and on July 28th, the first and second attacks respectively. One could also say that there was not a defined strategic logic and that affected the mission's objective.[1]
[1] Blanco and Sanborn eds. The American Revolution, 1290.

[1] Blanco and Sanborn eds. The American Revolution, 1289.
[2] Ibid.
[3] Ibid.; Journal of the Attack of the Rebels on His Majesty's Ships and Troops, Under Command of Brig. Gen. McLean and Capt. Henry Mowatt, Commencing 24th July, 1779 at Majebiguiduce in Penobscot Bay. From the Nova Scotia Gazette, Halifax, September 14, 1779. Communicated by Joseph Williamson, Esq., of Belfast. Collections of the Maine Historical Society 7 (1876): 123.