Intern's Corner: The Battle of Monmouth


We’re pleased that Mark Relation, a Sophomore History Major in the Honors Program at Boston College, has joined us as an Intern this summer. In addition to his scholarly pursuits (Mark plans to pursue a Ph. D. in Ancient History), Mark is a musician – he plays saxophone in Boston College’s Marching Band and Wind Ensemble. When we invited Mark to be a guest blogger this summer, he suggested a series on the Battle Monmouth, which we will begin today with this overview of the event. Check back for future posts, as Mark plans to focus on some of the more interesting characters who emerged from the drama of the Battle of Monmouth, and tip off our readers on materials that can be found on the subject in the collections of the David Library of the American Revolution.

On June 28th, 1778, the British and American forces met in the last major battle to be fought in the North. The battle took place near Monmouth Courthouse as the American forces attempted to harass the British during their retreat from Philadelphia to New York. Washington intended on cutting off the British rear guard and destroying them, but due to General Lee’s reluctance to follow orders that he disagreed with, reinforcements to the British rear, and a lack of communication and proper planning by the Americans under General Lee, the battle did not go as planned and descended into heavy fighting. The British initially held the advantage against Lee’s troops, but the arrival of Washington on the scene with reinforcements managed to turn the tide in favor of the American forces. However, the heat and humidity of the day combined with the long and drawn out nature of the fighting allowed the British to retreat without significant pursuit that evening. Both sides considered this a victory, as the Americans had won the fighting by occupying the field after the British retreat, and the British had successfully escaped to New York, their initial goal for the whole campaign. During the fighting, the British lost up to twelve hundred men and the Americans lost between five and six hundred, though casualty rates vary and exact numbers are difficult to determine. In the aftermath of the battle, General Lee was blamed for the lack of clear success as he did not follow Washington’s orders to attack as planned and failed to appropriately plan for and carry out the battle. After a month of trials
in a court martial, he received a one year suspension from command and was never placed in command again. (My source for this entry is The American Revolution, 1775-1783: An Encyclopedia by Richard L. Blanco and Paul J. Sanborn; New York: Garland Pub., 1993.) 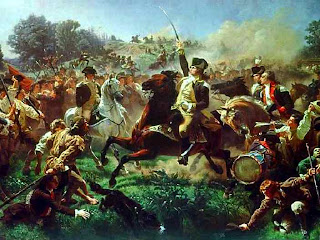